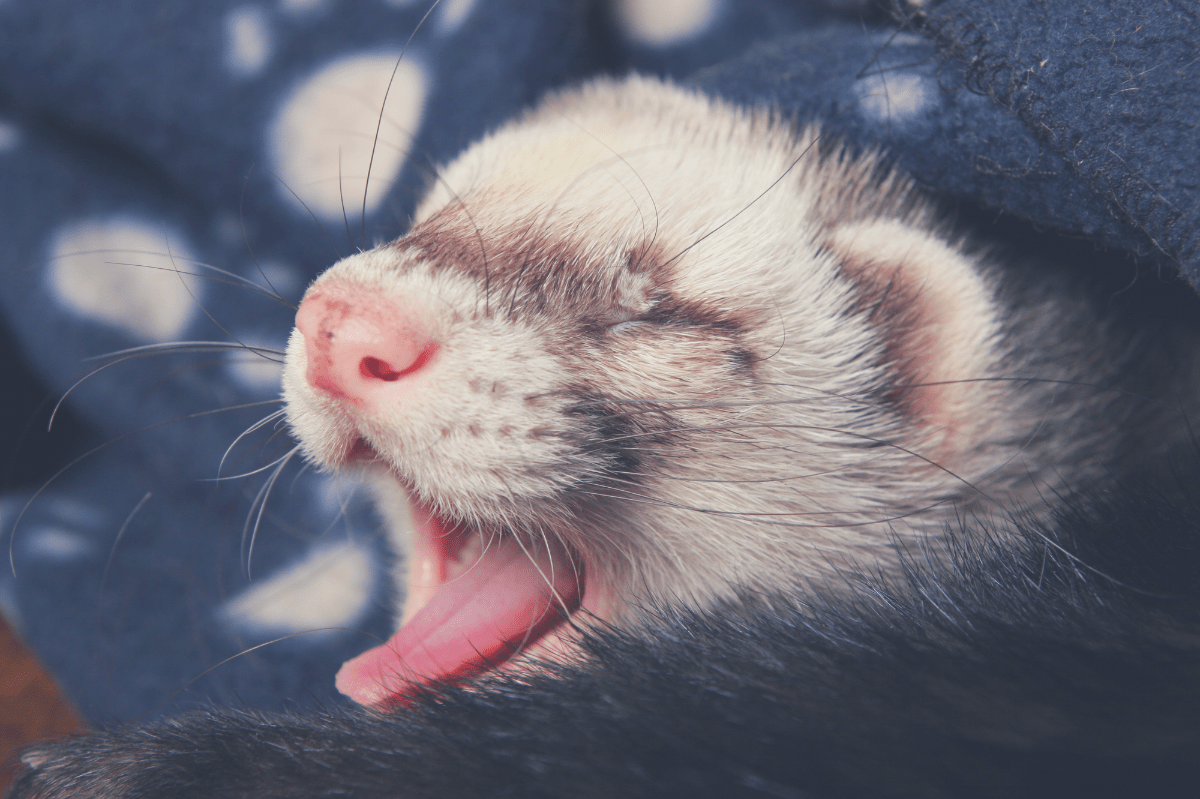 One of the biggest shocks that dawn on new ferret owners is how much these pets love to sleep. Every time you walk into their cage or sleeping area, you can expect your pet ferrets to be probably snoozing.

This can trigger a wave of worries that may force the owner to seek Veterinary care even when they’re perfectly fine. How much do ferrets sleep and why do they spend virtually all of their time in Dreamland unlike rabbits and similar pets?

How much do Ferrets Sleep?

Ferrets sleep between 14-18 hours on average based on factors such as age, sex, and overall health as well as the owner’s routine. Young ferrets and adults suffering from insulinoma may sleep continuously for over 20 hours.

Thus, unless your new pet is showing signs of an infection or illness, the long sleeping routines should be treated as normal. Shall we take a deep dive into the sleeping behavior of ferrets and other highlights of their lifestyle?

Where Do Ferrets Sleep In The Wild?

Ferrets have been domesticated for the last 2 centuries or so but they’re primarily wild animals that have historically been forced to develop survival instincts in those environments.

Primarily known as Polecats in the wild, these creatures sleep in old rabbit burrows, under tree roots, and similar areas that provide shelter day and night.

Unlike the domesticated breeds, polecats in the wild are primarily nocturnal and become more active at night. Additionally, they thrive in cold weather due to their origins from the Northern Hemisphere, where temperatures can tumble to as low as -90 degrees Fahrenheit.

Factors That Determine How Much Ferrets Sleep

Several factors can determine the length of a ferret’s sleep so let us dive deeper into a few to get a better understanding of why your beloved pet may be snoozing too little or too much?

Did you know that female ferrets are more physically active than males? That’s right! Studies and keen observations have concluded that the males sleep slightly more than the females.

No explanation has been found for this habit yet but if you’re looking for a ferret to play with as much as possible, you might want to get a female. With these pets renowned for being extremely lazy, the last thing you need is a snoozing male that refuses to open its eyes.

Ferrets are naturally hardy animals that can withstand the lowest room temperatures, thanks to survival traits developed by their ancestors in the wild. As previously stated, ferrets originate from the Northern Hemisphere where temperatures can be unforgivably low.

Ferrets sleep more during the winter and other cold periods of the year. The lower the prevailing temperature, the longer and better they sleep. This is why putting them in an air-conditioned room can be so critical during summer when room temperatures typically rise.

It is not uncommon for baby ferrets to snooze up to 20 hours a day regardless of the prevailing temperatures in their surroundings. Like other animals, these pets expend a lot of energy while trying to adjust to the new environment.

This springs up the need to sleep for as many hours to conserve energy to stay active for the remaining 4 hours or so each day. This baby ferret sleeping routine can continue until they’re a year or so old before a relatively higher level of physical activity kicks in.

If you’ve just brought in a baby ferret, no need to freak out over the excessive sleeping. As it grows older, changes will begin taking effect.

It is normal for a sick ferret to sleep more than usual. Like other animals, infections and illnesses can take a heavy toll on energy levels. This can translate to an insatiable need to sleep to conserve the little energy left.

Sick ferrets typically wake up briefly to eat, drink, take toilet breaks, and go right back to sleep. If you notice similar signs in a fairly active ferret, seeking prompt veterinary care can be lifesaving.

Be sure to share any observations with the Veterinarian during the clinic visit as that can be helpful in many ways.

Certain medications can trigger serious side effects in ferrets just like humans and other animals. This may lead to even more sleep in a relatively active pet used to playing or engaging in physical activity for a few hours daily.

Additional side effects of medications may include loss of appetite, weight loss, and lethargy. It is not uncommon for ferrets to be caught spending their woke hours staring blankly at the wall without moving or showing other physical signs. Ferrets are extremely adaptive pets that pay attention to their environments and make the necessary changes to suit them. The activity level of an owner can determine how much sleep the pets may get.

Ferrets end up sleeping less in households with energetic members who engage in one sort of physical activity or the other. Since you spend several hours running up and down, petting, and engaging in other forms of physical activity, these pets adjust their schedules to be ready to play.

However, if you live a couch potato lifestyle or a busy professional life that leaves no room for physical play after getting home in the night then your ferret will have a field day sleeping since there’s nothing else to do.

Over time, the ferret may become used to sleeping for 18 hours a day or more.

How Long Do Ferrets Play?

Ferrets require 3-4 hours of playtime within 24 hours. The good news is that this does not need to be done continuously. These playtimes can be carefully staggered throughout the day to ensure the pets get the right amount of physical activity.

Consistency is the key here because ferrets will have no problems adjusting to your schedule as long as you stick to a particular routine. Since these pets sleep for about 75 percent of the day, staggering the playtime also ensures that they’re tired right before each phase of long snooze.

This can result in significant sleep improvements and resultant health benefits.

What is Ferrets “Dead Sleep”?

One of the most common characteristics of ferrets is to fall into what is popularly known as the “dead sleep”. This is a deep phase of sleep where they might seem dead due to the lack of waking up to eat or engage in other movements.

Ferrets can fall into “dead sleep” for as much as 20 straight hours and no matter how hard you try, they’ll refuse to wake up. This condition can trigger a wave of panic among the majority of first-time ferret owners because they might feel that their pets have died.

Dead sleep occurs when your pet ferret suffers insulinoma, a condition caused by pancreatic tumors that surge the body’s production of insulin. This triggers severe levels of low blood sugar making it extremely difficult for the ferret to wake up or experience sensations such as hunger or thirst.

Insulinoma is common in ferrets within the ages of 3-4 and affects both sexes. If your pet ferret has been diagnosed with the condition, here are a few ways to manage the symptoms:

High-Protein Ferret Food: A constant supply of premium quality high protein ferret diet can keep the symptoms at bay. This is why ditching foods containing high contents of sugar and carbs can be such a great idea.

Honey or Corn Syrup: Rubbing honey or corn syrup on the gums of a ferret suffering a bout of insulinoma can increase blood sugar levels rapidly. But do seek immediate veterinary care afterward.

Where Do Ferrets Sleep?

Congratulations on the decision to adopt a ferret to raise. One of the most common questions first-timers ask is where these cute and cuddly pets can sleep. Here are the common sleeping spots for ferrets:

Metal or wooden cages can be the perfect sleeping spots for ferrets. The cages should be spacious enough to accommodate multiple hammocks so the pets can choose which one to sleep in at any point in time.

Firstly, these hammocks provide dark space for ferrets to snooze especially during the day when bright lights may easily get into their eyes. Light cannot only affect the ability to sleep but it may interfere with the reproductive cycles of ferrets as well.

This can bring confusion as to what time of the year to mate, which may be detrimental to their long-term health.

Remember, ferrets also require darkness during the night. If their cage is in the bedroom, make sure to switch off the lights immediately after sunset. This should boost the quality of slumber they can get and the resultant effects on their overall health. It is advisable to get a metal or wooden cage installed before the pet ferret arrives in your home but that is not always possible. The good news is that in the absence of a cage, these lovely creatures will fall asleep anywhere as long as they’re tired enough.

However, ferrets love to burrow and hide in places you might least expect. Finding them can be stressful and time-consuming especially after arriving home on a long hard day.

Some ferret owners love the feeling of snuggling up to their pets in the middle of the night and thus decide to share a bed. However, be mindful that this could expose you to a surprise poop in the morning since these pets like to do the dirt at some point during the night.

When Your Ferret’s Sleeping Habits Should Trigger Concerns

It is no secret that ferrets are lazy animals that spend the majority of their day sleeping. Does this mean you should look on unconcerned no matter how much they sleep? The answer is no, paying constant attention to the pets may be the difference between a neglectful and loving owner.

Besides, strange behaviors can be spotted easily when you pay more attention to your pets. For instance, if your ferret is sleeping beyond 20 hours a day, suffered a sudden loss of appetite, and showing signs of lethargy after being awake for a few minutes, that should be a cause for concern.

While we’ve outlined the signs of insulinoma previously, ferrets may be susceptible to a wide range of medical conditions, according to the CDC. A few health complications common in these pets include:

Ferrets are cute and lazy pets that love to sleep. The average one spends anywhere from 14-18 hours snoozing depending on factors such as temperatures in the environment as well as age, gender, and state of health.

It can be worrying to have a pet that seems to spend more than three-quarters of the time sleeping but this is normal behavior. However, if your ferret is getting 20 hours a day or more of shuteye, losing weight rapidly, stares at the wall blankly for hours, and showing signs of extreme physical weakness, do not hesitate to seek urgent veterinary care.

Sometimes every person has a hard time going to sleep. The cause varies from person to person, but everyone wants to solve the problem. Of course, there are some basic habits that most of us have...

Sleep quality can be affected by so many factors, including the amount of caffeine you consume and the tidiness of a bedroom. Luckily, there are things you can include or exclude from your evening...